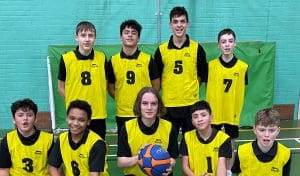 Playing at home against a local school, Magna were quick out of the blocks and managed to pull out a 10-3 lead in the first quarter. Modesto with an excellent mid-range basket to open the scoring was the highlight of the opening period.

Magna continued to pile the pressure on in the second, stretching their lead further thanks to some excellent rebounds and lay-ups from Dimitrios (centre) and captain Ephram. Magna held a 20-7 lead at the halfway point.

The third quarter was the toughest for Magna and was the only one in which they were outscored by their opponents, who had found their feet and were starting to put some points together. The end of the third quarter saw the gap reduced to just seven points at 22-15 to the hosts. A strong performance during the final period was much needed to see the result home.

Magna managed to finish as they started. Point guard Harry and guard Oliver adding their names to the scoresheet as well as efforts from power forward Ephram and Dimitrios. The last few minutes were played out well by Magna, who soaked up pressure from the opposition and managed to stay resolute in defence as the game finished 31-22 to Magna Academy.

I am so proud to say that not only have we made history by playing our first ever Basketball fixture but we have come away with the victory. It is a credit to the boys’ hard work they have put in during training each week in order to prepare for this day. Well done to each and every one of you, I am already looking forward to our next outing!

Most Valuable Player (as voted for by the opposition): Ephram (PF)