On Thursday 11th November Magna Academy came together as a community for Remembrance Day. The whole Academy gathered on the running track where Mr Stoddart read The Exhortation and the Last Post was played by Lewis Brewer and Zach Best. 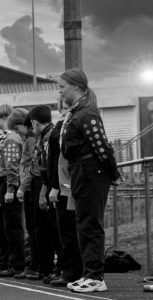 Students demonstrated exemplary behaviour throughout and many staff and students found the ceremony very moving. Afterwards, when asked for their reflections on why remembrance is important students gave answers such as “It helps their memories live on” and “To remember those who gave their lives to keep us safe.”

Throughout the week, each year group has also received an assembly from the Head of History, Miss Stannard, about the reasons why we remember, not only focussing on the sacrifices made during conflicts but also more recently in peacekeeping missions and during the Covid pandemic. We have had a team of student volunteers who, over the last week, have done a fantastic job and managed to sell nearly every poppy from the three boxes given to us by the Royal British Legion. Finally, students will now be given an opportunity to reflect on the week’s events by creating a poem or reflection about Remembrance Day, a selection of which will then be displayed within the Academy.

Magna Academy welcomed local MP Michael Tomlinson, to join a debate with our students about the pressing issues currently facing the country and the world.…

Magna Academy students gave a helping hand at the Adastral Square Platinum Jubilee street party. They were “all superstars” manning three stalls between them; jewellery,…