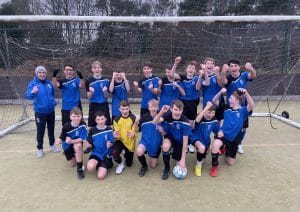 The Year 9 Football team concluded their long wait for a win with a remarkable 6-2 victory in the Last 16 of the PEDSSA Town Cup.

The game commenced at a blistering pace and Magna quickly opened the scoring with a superb right foot strike from Alex inside the first five minutes. As the weather began to turn, so did the momentum of the game and the away team soon equalised with an attack down the left side. Ten minutes later, the visitors were in front after a shot slipped through the Magna defences. However, the fantastic home support inspired their team to get back into the game. Man of the Match, Jayden, was duly at hand to score a sweet strike and bring the score back level just before half time.

The team emerged from the break more disciplined and composed, and dominated the second half. Goals from Archie and Harry put Magna into the lead again before two further goals from Jayden completed his hat-trick and finished off the tie in emphatic fashion.

Congratulations to the Year 9 Boys and best of luck in the next round!