Here is a short reverse history of Magna.

In January 2020, we ushered in a new era at Magna after a term spent under interim management. Aspirations Academies Trust appointed Natasha Ullah as Principal, joining the academy from the Thomas Hardye School in Dorchester. We are proud that Natasha is the first BAME headteacher to be appointed on England’s South Coast.

In the wake of the unfolding Covid-19 pandemic, Magna Academy was obliged – like all English schools and academies – to temporarily close its doors to students from 20 March 2020. Its early and rapid preparation for closure allowed it to launch a thriving Virtual School on its website at the point of closure. Magna began the process of reintegrating its students to the site from 15 July 2020, when groups of Year 10 and Year 12 students were welcomed back to the academy. Magna has continued to deliver onsite learning and remote education throughout each subsequent lockdown and has received considerable praise and support from students and families for its efforts. The academy has applied rigorous high standards since the pandemic struck and continues to adapt and optimise measures to ensure health and safety is its first priority in these challenging times.

2021 has seen record levels of student applications for Year 7 places at Magna Academy. The number of families making Magna their first choice is up by 25% on 2020 and the number who made Magna their second choice also increased, in this case by 27%. 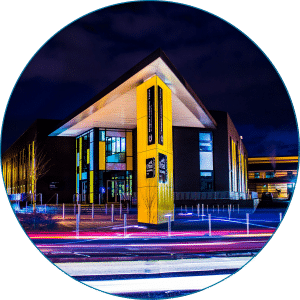 In 2012, Ashdown Technology College was placed in special measures after Ofsted assessed the school as “inadequate” for overall effectiveness. Ashdown was subsequently assessed by Ofsted as being “good”. As a consequence of these assessments, the college formally became Magna Academy, part of the Aspirations Academies Trust, on 1 September 2013. The new headteacher replacing Liz Jones was Richard Tutt.

In 2000, the school was presented a DfE School Improvement Award. The following year, under the DfE’s Specialist Schools programme, Ashdown became a Technology College. In 2005, Ashdown was recognised by the Specialist Schools Trust as one of the “Most Improved” and “Best Added Value” Schools in the country. The DfE also designated Ashdown as a High Performing Specialist School. In 2006, Ashdown was re-designated as a Technology College with Vocational Learning added to its specialisms. A Sixth Form was introduced. Headteacher Ashley Pellegrini was replaced in 2007 by Liz Jones.

In 1990, Mollie Snell retired from her post as headteacher and the role was taken up by Ashley Pellegrini, who had previously served as deputy headteacher of Mellow Lane Comprehensive School in Hayes, Middlesex. In 1995, the Charter Mark Award was given to Ashdown for Excellence in Public Service. On 7 October 1997, two arsonists set fire to the site overnight, closing the school for a week. Parts of the building were badly damaged and the music room destroyed. New facilities were constructed in 1999, with a new music room and five new classrooms added. The school received its second Charter Mark Award in 1998.

The construction of Ashdown School began in 1986 in a large field in Canford Heath, Poole, Dorset. It was formally opened as Ashdown School on 7 July 1989 following the merger of Ashley Cross Girls School and Seldown Boys School. The opening ceremony was conducted jointly by HRH Princess Margaret and the school’s first headteacher, Mollie Snell. Six hundred students attended the opening of the school.

Our Vision At Magna, we have a vision that seeks to transform each individual student’s life through our culture of high aspirations, hard work, resilience…