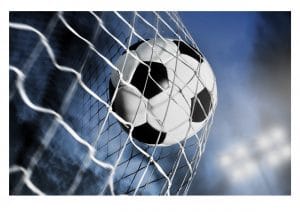 The Year 8 Football team took centre stage on a wet and blustery Tuesday afternoon in their Town Cup Last 16 fixture against a local school.

Despite challenging weather conditions, it took Magna just four minutes to open the scoring. Striker Alfie latched on to a through ball to lob delightfully over the goalkeeper to press home the advantage. From here Magna started to dominate the game, keeping possession well and playing into the flanks in order to get in behind the opposition. It would only take five minutes for Magna to double their lead, as Alfie’s attempt at a second was saved by the goalkeeper but turned in by attacking midfielder Callum from close range. Callum would then double his own tally for the afternoon, heading in a dangerous cross from winger Riley to put Magna three goals to the good after just fifteen minutes. This polished off a fine spell of eye-catching Football from the Year 8s and they thoroughly deserved their three goal advantage. Magna were punished for a slow ending to the half though, as the opposition scored from an excellent free kick just before the break. 3-1 to Magna at half time.

The second half was a much tighter affair. There were chances for both sides but in the end Magna were able to see the game out with relative comfort. This was aided by cool performances from centre-backs Lloyd and Jayden who dealt with opposition attackers well and won the ball back for Magna on several occasions. Goalkeeper Zak also deserves a mention for his excellent leadership and communication with the back four to keep the result in Magna’s favour.

The 3-1 full time scoreline means that the Year 8 Football team advances through to the quarter finals of the Town Cup. This fixture will be drawn during the half term break and played on our return. Well done everybody for this result and performance, although we know we can be and will need to be, even stronger to get through to the semi-finals!